IMPORTANT - COVID-19: The Alhambra is currently closed until 26th April. All ALHAMBRA TICKETS and GRANADACARDS until this date will, therefore, be refunded automatically.

On the 1st April, the Alhambra will either open or remain closed. If it remains closed, all Alhambra tickets and GRANADACARDS will be refunded automatically for the dates of closure.

If the Alhambra opens on the 27th April, then Alhambra tickets and GRANADACARDS will not be refunded. However, if you are physically unable to reschedule your holiday in Granada because of accommodation or flight problems, then you should contact the ALHAMBRA or GRANADACARD directly to request a refund. 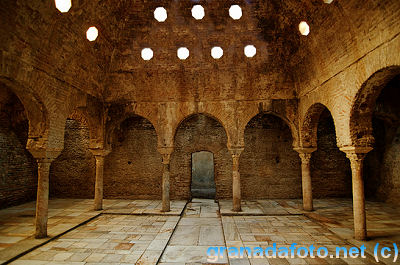 These baths used to be part of the Mosque of the Walnut Tree (Mezquita del Nogal) which previously stood here. They were built in the 11th century and are considered to be among the oldest and most complete baths in Spain. This was a traditional meeting for place for locals, who would come here for haircuts and massages. There were different times for men and women, who would seldom leave their homes (except for a weekly visit to the cemetery and a once or twice monthly visit to the baths). Brides-to-be would also come here before their weddings.

You enter the baths through a small house which was reconstructed in Christian times. At the end of a small hallway (zaguán), there is a courtyard with a pool (alberca) and from here you can access the baths themselves, with their three rooms: cool room, (sala de refresco), central room (sala central) and finally, the hot room (sala caliente). The columns were taken from Roman and Visigothic ruins and the octagonal or star-shaped holes in the roof allowed light to enter and steam to escape. They also reduced the weight of the roof.